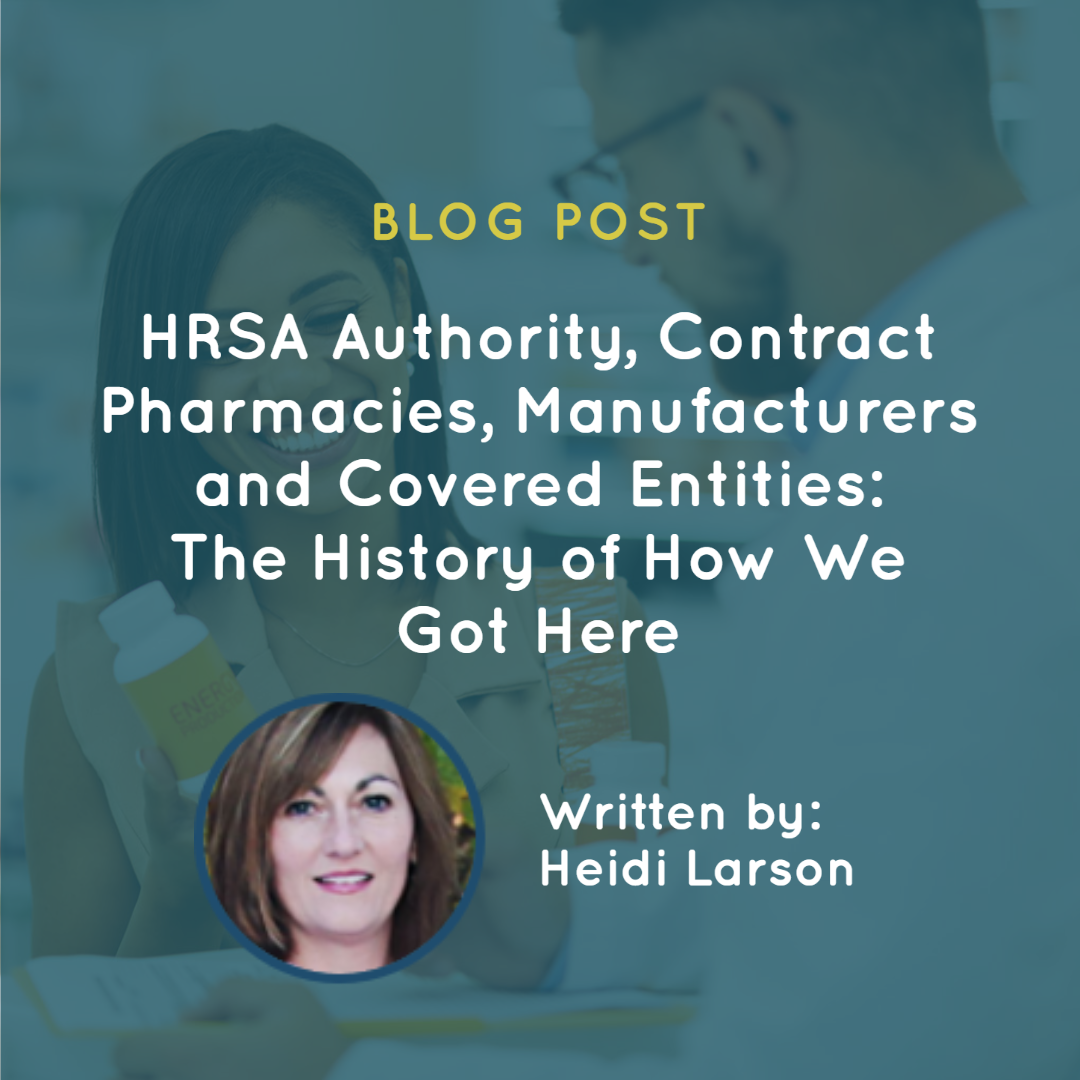 In order to fully understand how we have gotten to the day when manufacturers are limiting contract pharmacy distribution of 340B drug; we need to understand the history– so let’s take a step back in time. In 1992, Congress created the 340B Drug Pricing Program to protect safety-net hospitals from paying for escalating drug prices by creating a process by which they could purchase outpatient drugs at a discount. The creation of the 340B Program was in response to the 1990 Medicaid drug rebate program (MDRP) created by Congress to lower the costs of pharmaceuticals that were reimbursed by the state Medicaid agencies. Manufacturers were asked to sign a pharmaceutical pricing agreement (PPA), with the HHS Secretary in exchange for having their drugs covered by Medicaid and Medicare Part B.  As part of the PPA, manufacturers agreed to provide up-front purchasing discounts on covered outpatient drugs to safety-net hospitals (covered entities) that serve the most vulnerable patients allowing them to take the savings to “stretch scarce federal resources as far as possible, reaching more eligible patients and providing more comprehensive services.”  The original intent of the 340B program is important to remember.

Congress appointed the department of Health and Human Services (HHS) and the Health Resources & Services Administration’s (HRSA) Office of Pharmacy Affairs (OPA) oversight of the 340B Program. The statute creating the 340B Program is only eight pages long in the 340B Public Health Service Act. This seems extremely brief given the complexity and compliance nuances associated with running a program. By definition, a statute is a written law passed by a legislative body, in this case, Congress, that provides authority and legal basis. At a high level, this statute only addresses twelve components of the program which was intentional by design. These include:

In 2014, HRSA provided a program update that emphasized the information in the 2010 guidance to include a reminder for covered entities to conduct independent annual audits, establish oversight, maintain an accurate OPAIS record, develop written policies, and restated the instruction for carve-out Medicaid at contract pharmacies unless arrangements with the state agency have been made and reported to HRSA. In 2015, HRSA released another program update related to processes around a change in contract pharmacy ownership. So, what happened in 2020 when manufacturers started limiting the distribution of drug to contract pharmacies?

Transparency to pharmaceutical manufacturers of how 340B savings are being used has been deemed lacking, however, the reporting of how savings are being used has never been officially required as part of the program. In addition, the number of contract pharmacies registered by covered entities has soared since 2010, resulting in concerns by manufacturers, in addition to providing exorbitant low costs drugs, that they also are providing duplicate discounts in the form of upfront discounted pricing to 340B covered entities and also a backend rebate to state Medicaid agencies. There are also concerns over the lack of oversight with multiple contract pharmacies. Adding to this atmosphere, are the misconceptions floating in the media about how covered entities are not passing the savings of the discounted prices of the drugs on to patients.  May I remind those, that is NOT the intent of the program as was developed by Congress.

The Trump administration just prior to leaving office issued numerous Executive Orders seeking to curb high drug prices. One such Executive Order was filed on October 2019 entitled, “Promoting the Rule of the Law Through Improved Agency Guidance Documents.”  This aimed to prohibit federal administrative agencies from issuing binding rules through guidance documents. Which may have played a role in the new pricing trend by manufacturers in that the savvy lawyers representing the pharmaceutical companies realized that contract pharmacy language was in guidance, not statute. Biden reinstated the original guidance policy which includes that drug manufacturers are violating the 340B statute by restricting covered entity access to 340B discounts for drugs dispensed in the contract pharmacy setting. HRSA is cautious to move forward with the support from the Biden administration due to the number of lawsuits, litigation, and their previously voiced opinion that they lack regulatory authority. So here we are today, in the midst of a national pandemic trying to care for patients while dealing with staffing issues, how to get paid for the care provided, and limited distribution of life-saving drugs from fourteen profitable manufacturers who have chosen to restrict the distribution of entity owned drug to contract pharmacies.

Now more than ever, your advocating voices are important to ensure HRSA is given administrative authority to enforce 340B Program compliance and access. Let your voice be heard.

https://turnkeyrxsolutions.com/blog/ February 14, 2022: 340B Winter Coalition 2022 – Congratulations on 30 Years! Continue to Share Your Story By: Jennifer Hagen 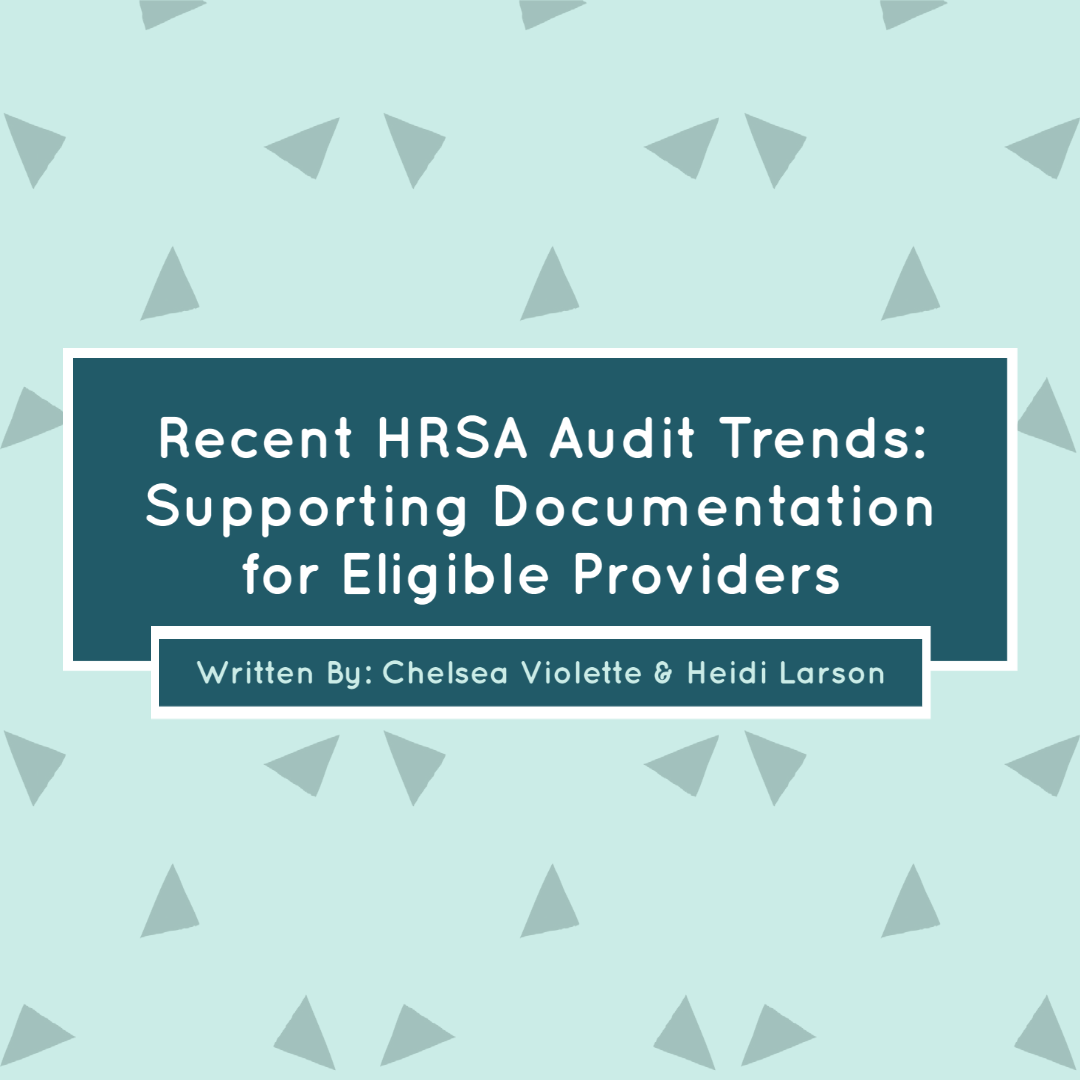 Historically, HRSA auditors have requested a list of eligible providers from covered entities during HRSA audits. Recently, however, HRSA auditors have been requesting that covered entities upload documents demonstrating that, for each audited utilization record, the prescriber was (at the time the medication was administered or prescription written) employed by, under contract with, or had some other type of arrangement/relationship with the hospital such that responsibility for the clinical care provided to the patient remained with the covered entity. HRSA FAQ 1442 further explains that non-covered entity providers solely with admitting privileges at a covered entity hospital are insufficient to demonstrate that any person treated by that provider is a patient of the covered entity, for 340B Program purposes.

We often hear; the provider is credentialed or has privileges, but what does that really mean? Credentialing is the process of obtaining, verifying, and assessing the qualification of a provider to provide care or services for a health care organization. Credentialing documents include evidence of licensure, education, training, and experience. A privilege is defined as an advantage, right, or benefit that is not available to everyone. For providers, the act of being privileged is the process whereby a specific scope and clinical service of patient care is authorized for a healthcare practitioner by a health care organization, based on evaluation of the individual’s credentials and performance.

Back to the question at hand, what have HRSA auditors been requesting to demonstrate provider eligibility? The answer may depend on the type of provider.

For each of these supporting documents, auditors have requested that they indicate start dates and, when possible or appropriate, duration of the agreement or granted privileges. Eligible provider lists are also requested to indicate start and term dates for providers.

While supporting documentation to demonstrate responsibility of care may seem more straight forward for providers employed by or contracted with the covered entity, it can leave a bit of gray area for orders written by outside providers. For hospital or clinic administered drugs that are administered as a result of an order from an outside provider, most often observed in the infusion setting, many entities qualify drugs as 340B eligible under their healthcare professional definition. In doing so, they assert their responsibility of care through patient assessment and care related to the administration delivered by members of the entity healthcare team, such as nurses. As HRSA auditors have become more familiar with this practice, they have begun requesting documentation in the medical record to substantiate care beyond the simple administration of the drug, such  as vital signs or clinic notes stating the patient was evaluated for appropriateness of receiving the drug and that it was well tolerated (or that the patient had a reaction and was treated accordingly). In these instances, HRSA auditors have further validated the inclusion of this definition in the entity’s policy and requested documentation that the healthcare professional providing patient care is employed by the entity and was working that day. This may include a contract, privileging documentation, and/or a timecard.

In scenarios in which covered entities have captured retail prescriptions as a result of a referral arrangement, HRSA auditors have requested copies or screen shots of the referrals in the course of the audit and for them to be uploaded to the NIH portal subsequent to the audit. While obtaining documentation back from the referral provider remains a best practice to demonstrate continued responsibility of care, this has not been requested in recent audits, and documentation of the medication in the patient’s medication list with the covered entity has been sufficient.

The key to supporting documents is that they demonstrate that care for the patient by the provider remains with the covered entity at the time the medication was administered, or the prescription was written. Covered entities should consider all aspects of patient definition to use 340B drugs. It is also important to include entity management of provider privileges in policies and procedures.

Unfortunately, these documents are not always found in one location, with one person, or even within the same department. Start checking for these documents during your monthly self-audits, understand each provider type and the documents needed, and lastly, know who would be your point person for each type of provider to obtain the necessary documents and establish a working relationship with them so that you’re both prepared when your number is up for a HRSA audit.